After about a month is France I can finally add a job to the list of things I’ve accomplished…alongside finding finding a place to live, successfully cooking & making French friends. Go me!
Starbucks called me a few days after the interview to tell me that I’d gotten the job & I just needed to bring in a whole list of things such as ID, medical cards, my working visa, my bank account information & my most recent diploma. Yup, that’s right…they needed a copy of my degree in order to give me a job. Of course, I got the call on a Sunday morning…the Monday might as well have been a stat holiday seeing as Tuesday actually was one & so why not stay closed on Monday as well. It made getting some of the things they needed a little bit more challenging than normal. None-the-less, I was pretty much successful in procuring everything (except the bank account information since I hadn’t yet opened a French bank account & because of the holiday couldn’t until Wednesday at the earliest…but in the end that all worked out). 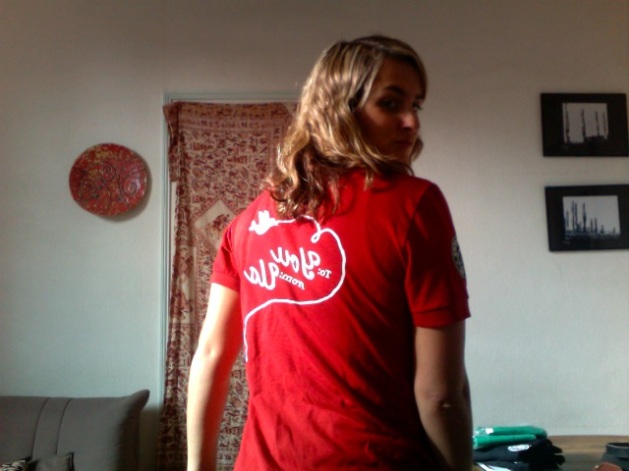 Unfortunately, in typical France fashion, I wasn’t going to actually be starting until the following Monday..so I still had a week to kill before actually starting work. I spent my time getting lost in Lyon, running, becoming obsessed with the Food Network website, going out a bit & swimming. I have to say that I will probably laugh the next time I hear someone complain about there being too many lane swimmers at the Y…or someone swimming too slowly in their lane. Lane swimming in France is frustrating (at best) if you want to do anything other than painfully slow breaststroke. First of all, there are only a few hours every day when the pool is open to the public. Thus, there are usually 4 lanes with anywhere from 6 to 8 people swimming in each one. The last time I went swimming, there was one guy swimming front crawl (it took him about a minute & a half to do one length), 4 people swimming breaststroke (one who you couldn’t pass without getting kicked because his kicks were so wide) and a girl doing a mix of everything & swimming all over the lane. So it was interesting. Another funny thing about French pools is the guys have to wear speedos…Board shorts aren’t allowed…so that’s…special. & the lifeguards sometimes just leave the deck. There is one person on deck the entire time that public swim is going on, but sometime they disappear for a few minutes. The best part about the pool near me is the changerooms..& when I say best, I’m saying that sarcastically. They’re coed…although, thankfully, no one changes out in the open.
Last Wednesday, I went out with my old roommate’s friend, Jean-Michel for drinks. We just went to the little bar down the street & had a few demi-pêches (that’s a half pint of beer with peach syrop…so yummy!) & talked. He’s pretty nice, but the situation is a bit awkward because Elsa keeps asking me what I think of him & how it’s going & if I think he’s “beau” & I don’t know what to saw because I mostly just want to be friends with him & don’t want to hear either of their feelings. Anyways, we’re supposed to go to a movie sometime, but I’m kind of avoiding it because there really would be no denying that that would be a date.
This weekend was also pretty eventful. Friday night, I met Anne & her Canadian roommate, Kate, at the Opéra. We got last minute 5 euro tickets to the ballet (Romeo & Juliet). We had to stand at the very back but it was cool to see a ballet at the Opéra. It’s such a pretty building. The ballet itself was pretty good although there were some scenes that went on a bit long (especially when you’re standing). The scenes between the 2 leads were incredible though. They were amazing dancers. Afterwards we tried to find somewhere to eat dinner because the girls hadn’t eaten yet, but since it was 10:30 places were either full or no longer serving food. We managed to find a pizzeria & I had this amazing pear pastry. Desert here really is pretty much always as delicious as it looks. Kate & I got along really well. We had a lot in common (she lifeguards at home & spent the spring in Thailand, for example). It’s always nice to meet people from Canada. We’ve had quite a few chats about our love of Starbucks coffee & how we wish we’d brought peanut butter & KD because we’ve been craving it. Her French is quite good considering she never took immersion & didn’t speak much before she came to France. She’s done well in the last 3 months. It’s amazing how quickly you can pick it up when you hear it & have to speak it all the time. She also thinks that my French is really good, which is always a nice compliment to get.
Saturday night Anne invited me to go with them to a Soirée 70s at a friend’s house from school. I went over to Anne & Kate’s apartment & got ready with them & Anne’s friend, Florent, who was in town for the night visiting. The three of them had great costumes. Especially Anne. Her’s was too perfect! She drove the 4 of us to the house & I met a bunch of their friends. It was really fun, but kind of a gong show. We finished off a bottle of vodka pretty quickly (although I suspect we had some help from some other people) & by 1am Kate decided she needed to lay down in the “coat room”. She spent the rest of her night there, with frequent visits from Anne & I to try & convince her she needed to come dance. I met far too many people to remember the majority of their names, but everyone was really nice & I spoke a lot of French. Funny how much better my French seems to get once I’ve had a few drinks. Anyways, by 5am everyone was leaving & we wanted to leave too. Everyone else we’d come with was pretty drunk still except me since we’d finished out vodka around 1 & I hadn’t really been drinking for a long time. So I drove Anne’s car back to Lyon & we all crashed at her house. The next say was pretty painful since Kate & I really aren’t used to being up until like 6am so we didn’t move much until very late in the day. I don’t know how people here do it. Staying out that late is killer.

Monday morning I had my first training shift at Starbucks. It was just 3 hours so the store manager just introduced us to the company & their mission & values & stuff. We got our uniforms also. Since it’s Christmas we have a sweet red shirt we have to wear on Saturdays. The regular shirts kind of remind me of how the guard shirts at the Y fit…aka, they’re unisex & totally unflattering. So there really is no girlyness at Starbucks in France…no earrings, no jewlery & manly shirts. Hot. I’m only working 18 hours a week (something about me being Canadian & them not being able to give me more hours than that) so I’ll probably be looking for another job pretty quickly.
Beaujolais Nouveau comes out this week. From what I remember it’s a huge party for one of the worst tasting French wines you can find. I never did quite understand it, but so many people go out & celebrate it’s arrival. Kate invited me to one such “party” tonight however it’s also Karine’s brother’s birthday this week so we’re having dinner & cake & champagne instead. It should be fun.

| FRANCOPHILE | OENOPHILE | LOGOPHILE | TUROPHILE | A self-professed foodie, lover of language, & travel enthusiast, I find joy in sharing my adventures as I eat, travel, & try to find the right words to tell you about it. International experiences are my jam, & I have some serious wanderlust. I'm cheesy, loyal, independant, & most of all, passionate; I wear my heart on my sleeve. I've been called intense, & I can't deny the label: I’m earnest & embrace my interests wholeheartedly. My experiences abroad have fueled an appreciation for a wide variety of foods & I love watching Calgary diversify. I delight in the ongoing search for delicious fare & take great pleasure in sharing my knowledge of Calgary's food scene.

| FRANCOPHILE | OENOPHILE | LOGOPHILE | TUROPHILE | A self-professed foodie, lover of language, & travel enthusiast, I find joy in sharing my adventures as I eat, travel, & try to find the right words to tell you about it. International experiences are my jam, & I have some serious wanderlust. I'm cheesy, loyal, independant, & most of all, passionate; I wear my heart on my sleeve. I've been called intense, & I can't deny the label: I’m earnest & embrace my interests wholeheartedly. My experiences abroad have fueled an appreciation for a wide variety of foods & I love watching Calgary diversify. I delight in the ongoing search for delicious fare & take great pleasure in sharing my knowledge of Calgary's food scene.